Lawrenceville, NJ – October 13, 2013 V.J. SCOZZARI & SONS, INC. was proud to participate in the Rededication of The Fathers’ Building (Pop Hall) at the Lawrenceville School.

Pop Hall was rededicated nearly nine decades after it was first constructed as the schools’ second major classroom building. The building reopened after a two-year renovation that gutted the interior of the building and turned the space between Pop Hall and Woods Memorial Hall into a landscaped courtyard.

The renovation project has been programmed, designed, constructed, inspected and commissioned for submission to The United States Green Building Council (USGBC) requirements for LEED 2009 for Schools Gold certification.

The result of the two year renovation is a fully restored, revitalized, and modernized building. The lower level which over the years served as a space for various school programs became increasingly more like a basement. The exceptional design transformed it into a state of the art technology powerhouse, as well as becoming home to the IT Desk, digital learning labs, the School’s Communication Office and student publications office.  This area also houses the school’s video production facilities and a “generous bar” for faculty and students.

The first and second floors of the building were restored to their original glory and then supercharged with technology and advanced functionality. The restored wood paneling and the gleaning rotunda are complimented by new high quality finishes and improvements worthy of such a prominent building.

The mechanical systems constructed and commissioned for the project utilized Building Information Modeling (BIM) to ensure the two 40-ton air handling unit systems with return fans, hot and chilled water coils, and steam pre-heat coils along with the 60 VAV terminal units with hot water reheat coils, as well as heating and chilled water pumps and a steam-to-hot-water heat exchangers would be properly housed with the existing buildings attic and in newly constructed mechanical spaces and shafts. Other systems that were integral in ensuring the building operated in an optimum energy efficient manner included a Building Automation System (BAS) that tied into the Campus’ main plant and control system, as well as light fixtures and lighting control systems, and emergency power systems.

By all accounts the building renovation project was a tremendous success from the lead donors and fundraising efforts that coincided with the School’s 200th anniversary, to the design and construction the result is a fully restored, revitalized and modernized Pop Hall.

The Lawrenceville School is an independent coeducational secondary school in Lawrenceville NJ. It was one of the Nation’s oldest college preparatory schools and was founded in 1810.

For more information on The Lawrenceville School visit: http://www.lawrenceville.org 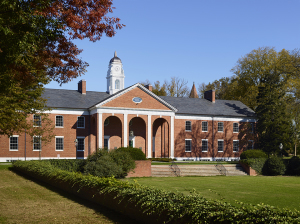