Friends Come in all Shapes and Sizes

It feels like just yesterday we were making the drive to Long Island to pick up Frank.  Fast forward five weeks and Frank has become a much larger presence in our office than what any of us had initially imagined.  Frank has the ability to make friends everywhere he goes and leave behind smiles, laughter and joy – who doesn’t like a puppy?  Most specifically, a puppy with a purpose. 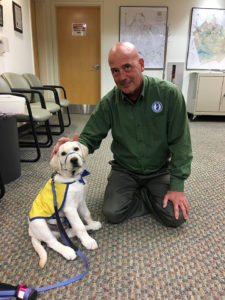 Recently Frank had the opportunity to make a special friend, Tom.  Tom is the Plumbing Subcode Official at West Windsor Township who is recently retired from the US Military after being deployed to two combat zones and subsequently being diagnosed with PTSD, because of such, he has taken an active interest in Frank and his future role as a service dog.  Canine Companions for Independence not only trains service dogs to work with adults and children with disabilities or the hearing impaired, but also with Veterans.

From the moment Frank met Tom there was an instant connection – they became fast friends.  One of the key factors to Frank’s training he is currently undergoing is socialization.  I would not be able to do my job as a volunteer puppy raiser if it wasn’t for people like Tom!  Frank and I are very appreciative of Tom and the rest of the West Windsor staff for taking time out of their day to get to know Frank and assist in furthering his training to achieve his goal of becoming a service dog.

The views expressed on this blog are mine alone and do not necessarily reflect the views of CCI.

This site uses Akismet to reduce spam. Learn how your comment data is processed.