A Day in the Life of Frank 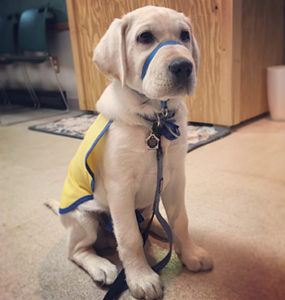 Even though Frank may have four paws instead of two feet and have big floppy ears and a wet nose instead of….well you get the picture, Frank’s work day is not that much different than yours or mine.

Frank wakes up, brushes his teeth, gets dressed, packs his lunch and heads to the office.  There he has his morning routine and makes the rounds saying hello and stopping to greet the passersby, he grabs a quick drink and is ready to settle into his morning.  Sometimes this means a meeting in the Conference Room or settling in at his desk. 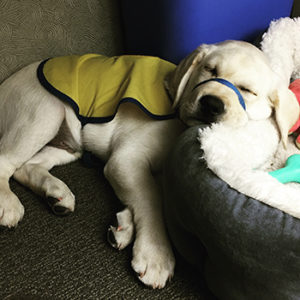 Until it’s lunch time, of course.  Like clockwork, Frank, much like the rest of us, knows when lunch time is approaching and that means he gets to go outside and stretch his legs.

Frank is assigned tasks just like you or I, only his tasks consist of things like practicing sit, down, let’s go and hurry.  These are the fundational skills that are imperative for Frank as he progresses on his journey to become a future service dog.  It is these skills that, as his training progresses, Frank will begin proofing in areas 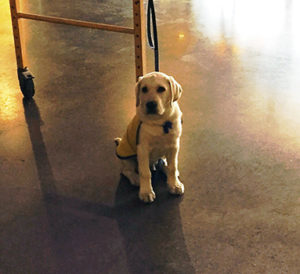 of higher distractions, such as out of his comfort zone of the office and at a jobsite.

As much as I’d love to say cliques don’t exist and Frank gets along equally well with everyone, that’s just not true.  The reality is Frank has his favorite ‘friends’, ‘friends’ he takes with him to meetings and ‘friends’ he confides in when feeling anxious.  But most importantly, his end of the day ‘friends’.  If you were to ask Frank what his favorite part of the day is, he would probably say the last fifteen minutes (or thirty minutes, if you asked him on a Friday) because that’s when he gets to be a puppy and all his ‘friends’ can come out and play! 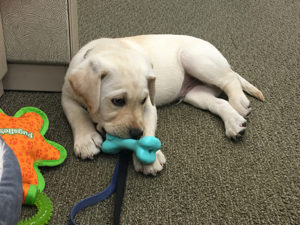 Like any good employee, Frank cleans up his toys at the end of the day prior to going home and starting it all over the next day.

This site uses Akismet to reduce spam. Learn how your comment data is processed.