Hamilton Township, NJ – May 9, 2014 V.J. SCOZZARI & SONS, INC. took part in the celebration and public opening of the Grounds for Sculpture’s Seward Johnson: The Retrospective.

Grounds for Sculpture opened its largest and most significant exhibition in its history at the unveiling of the Seward Johnson: The Retrospective. The founder of the not-for-profit Grounds for Sculpture, Seward Johnson was on hand for the celebration which also marked the official opening of the newly renovated and repurposed Seward Johnson Center for the Arts. The 30,000 sf facility includes a newly design  Welcome Center, gallery and exhibit spaces, screening rooms, a state-of-the-art orientation theater, a Museum Shop, the new Van Gogh Café, a Members Lounge overlooking the ponds and gardens.

The project planning began several years ago and construction began in 2013 and was completed for the opening of the Seward Johnson: The Retrospective exhibit. The work included complete interior and exterior renovations and alternations that converted a flex-space warehouse building into a world class, state-of-the-art home for renowned Grounds for Sculpture. With the exception of the structure itself nearly every component of the building was modified and improved in response to strategic plan recommendations and visitor feedback. From the replacement of the roof to the resurfacing of the floors, every component of the building including entirely new plumbing, specially design mechanical, electrical, lighting, and sound systems were installed. Acoustical treatments were a high priority in every component of the project. Exterior improvement to the facility included an entirely repositioned entrance to the facility which included new entrance drives, parking, drop off areas, exterior viewing spaces and gallery’s, as well as landscaping and hardscaping improvements. For more information on the Seward Johnson Center for the Arts and the new Welcome Center visit: http://www.groundsforsculpture.org/. 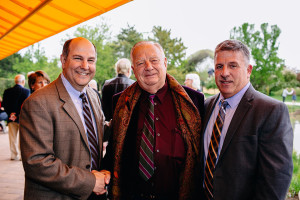 The opening was attended by thousands of members and guests who toured the 42-acre park and were treated to more than 287 works of art by the 83 year old American sculptor and philanthropist. For more information on Seward Johnson: The Retrospective visit http://www.groundsforsculpture.org.

Grounds For Sculpture.  is a  not-for-profit corporation with a Board of Trustees overseeing the successful operation of the sculpture park and museum. Grounds for Sculpture was established in 1992, on the grounds of the former New Jersey State Fairgrounds, with a mission to present to its visitors an evolving permanent outdoor collection, seasonal exhibitions, and educational programs designed to facilitate the understanding of and appreciation for contemporary sculpture by:

For more information on The Grounds For Sculpture visit: http://www.groundsforsculpture.org.